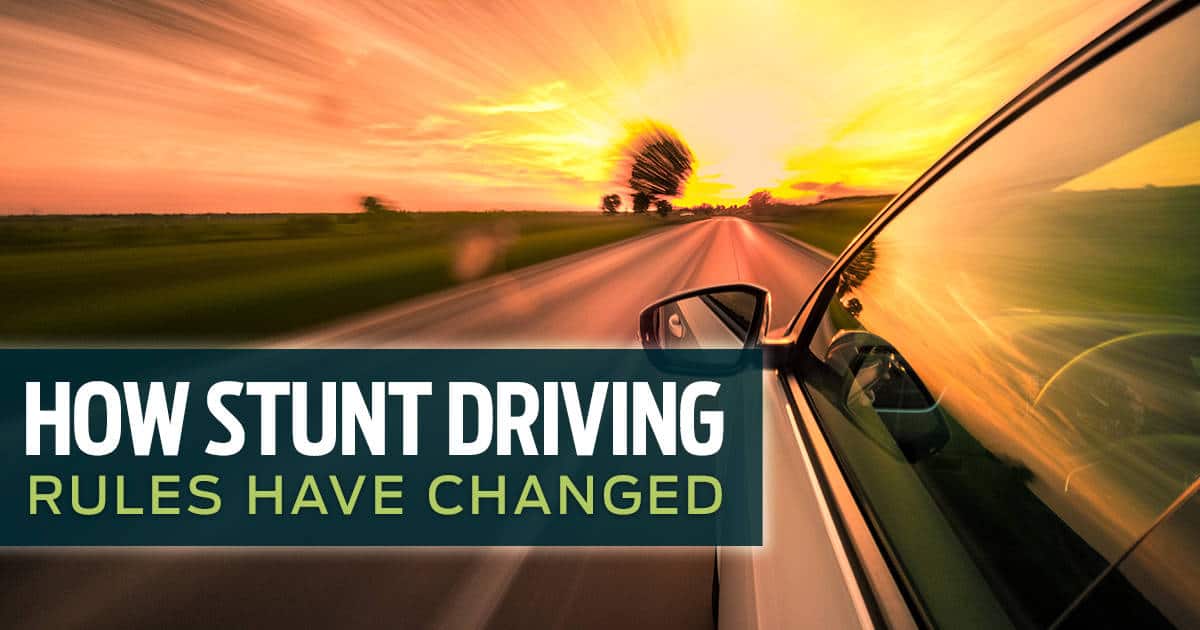 Under the Moving Ontarians More Safely Act, Ontario has altered how much a driver can exceed the speed limit on some roads before it will be considered “stunt driving.” This new change came into effect July 1.

The change entails that roadside driver’s license suspensions may increase from an initial seven up to thirty days for all stunt driving offences. The criteria for stunt driving has also decreased from an initial 50 km/h over the speed limit to 40 km/h on roads with posted speed limits of less than 80 km/h. On roads with posted limits of 80 km/h or higher, the limit continues to be 50 km/h or higher.

A stunt driving conviction is more significant than your average speeding ticket, because it is considered a major offence rather than a minor. Having a major conviction on your driving record, negatively impacts your auto insurance premiums and may result in your insurer non-renewing the policy because of your conviction.

Additionally, vehicles can now be impounded for two weeks up from the additional decree of one. This change was implemented in hopes that drivers would be deterred from unsafe driving practices and offences – which have been steadily increasing in frequency since 2015 – may start to go down again.

Speeding, stunt driving, and other unsafe driving practices don’t just put you and your passengers at risk. They also threaten the safety of other drivers on the road, as well as pedestrians. Auto collisions can range anywhere from bumper accidents to full-blown tragedy, and the best way to reduce our chance of being involved in an accident is to practice better driving behaviour.

Safer driving is beneficial for a number of reasons. Not only does it secure us, our passengers, pedestrians, and other drivers on the road, but it can save us money and reduce our insurance premiums. The more tickets or traffic violations you incur, the more likely you are to be labeled as a “high-risk” driver by insurance companies. This can make your insurance premiums much more expensive or make it difficult to get insured at all.

Here are some tips for safer driving:

Not only is distracted driving incredibly unsafe, but it’s also illegal! In the province of Ontario, you may face a fine of up to $615 for a first conviction but up to $1,000 if you fight your ticket in a court of law and lose. You may also receive three demerit points and have a 3-day license suspension.

A second conviction can lose you up to $2,000 if you fight your ticket and lose in court as well as six demerit pints and a 7-day license suspension.

You may think that distracted driving is only using your cellular device – but it’s more than that. While texting, talking with a handheld device, using social media, fiddling with a GPS or scrolling through playlists are all obvious distractions, eating, drinking, fixing your makeup, or turning around to chat with backseat passengers may also be considered distracted driving. Nearly 80% of collisions were caused by some degree of driver inattention – for up to as little as three seconds – prior to the accident.

Don’t speed – even when conditions are good

An open road and good, clear conditions may make it tempting to ramp up the speed a little. Unfortunately, the fact of the matter is that the faster you go, the longer it will take to come to a complete stop – which means the odds of you getting in a collision and the severity of a collision will be that much higher. You never know when someone may unexpectedly cross the road or a vehicle pops up “out of nowhere.”

Slow down, stick to the speed limit, and keep your eyes on the road ahead of you if you need to come to a sudden stop.

Driving under the influence of drugs and alcohol is deadly, both for you and others on the road. In fact, every day on average there are roughly 4 Canadians killed in impairment-related crashes. If you are planning to consume drugs or alcohol, arrange for a safe ride home – like a sober driver or plan out a ride through a ridesharing app. You may even opt to use public transport.

Driving fatigued is another form of impaired driving that often goes without notice but driving without adequate sleep can be just as deadly as drunk driving or driving high. Make sure you get a good seven to eight hours of rest before driving anywhere and if you feel drowsy, pull over.

Even if you are a seasoned driver who has been on the roads for years, it’s never a bad idea to have a quick refresher. Some defense driving courses may qualify you for discounts on your insurance. They also help you to freshen up your driving behaviour and remind you of the traffic rules you may otherwise have forgotten about.

The consequences of risky driving

With the new changes in July, the Ontario government has also introduced increases for the post-conviction driver’s license suspensions, for any individuals who have been convicted of stunt driving.

Unfortunately, high-risk driving is not uncommon practice. With the implementation of this new change, the hope is that drivers will be deterred from risky driving behaviour and that the roads will be much safer. You can do your part by practicing safe driving behaviour! It will pay off – both for you and your family’s peace of mind and for the peace of mind of others on the road.

Do Insured’s Have Adequate Loss of Use Limits?

How to Insure Your Watercraft

You Could Lose if Your Condo Corporation Skimps on Coverage